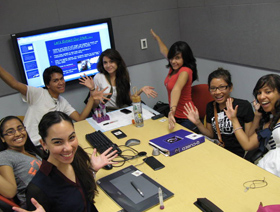 Discovery consists in seeing what everyone else has seen but understanding it for the first time...
-Albert Szent-Gyoygyi

In a large, bright classroom at Baboquivari Intermediate School, Donna Sider's 20 squirming sixth-graders are facing something unexpected. Instead of listening to their teacher lecture and quiz them about the properties of plants and animals, the students have a strange new assignment: they must think up questions themselves.

Organized into groups of three or four, the students are a bit skeptical as Sider gives them each a small colored post-it note with a single word -- "squirrel," or "sunflower," for example -- written on it. For the assignment, Sider says, each group must fill in a question-mark diagram that lists "what I know," "what I would like to know" and "what I think I know."

At first, there are murmurs of confusion; the children aren't sure why they're the ones having to ask questions. Even so, almost all of them are intensely interested, their post-lunch grogginess interrupted by this new assignment.

As the groups start working, Sider walks to each table, observing their work and offering advice. "Good," she says, reading one group's notes. "How are you going to change that into a question?"

As the lesson progresses, the students pick up speed. Some groups have so many questions that they can barely squeeze them onto the single sheet. Sider says questioning is especially important for students like hers, who live on the Tohono O'odham reservation. "Questioning invokes hearing and seeing," says Sider, who uses a similar lesson with her reading classes. "The question mark (worksheet) really focuses it better for them."

One group of girls, wondering about a killer whale, has decided that they know that the animal is large, although they're not sure if it only eats fish. They're definitely interested in the size of the animal's teeth.

Another student, a shy girl with long, dark hair, says she loves asking questions about her group's topic, a sunflower. "You're working in a group with your friends, and you can share ideas," she says.

At the end of the lesson, Sider instructs each group to select their best questions and write them on colored post-its. The sticky notes are then attached to the lesson's most intriguing product: a four-foot green question mark affixed to a back wall. By the end of the day, it is covered with dozens of queries gathered from all of Sider's classes.

Sider says she's pleased with the enthusiasm she sees in a normally quiet group of students. "I'm more of a facilitator," she says, proudly showing off pages of her students' questions. "When they open up (to me), I'm really surprised."