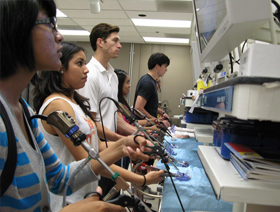 Ignorance per se is not nearly as dangerous as ignorance of ignorance.
-Sydney J. Harris

Q: What are the foundations of the summer program? When was it founded, and under what circumstances?

A: I've always viewed science as a series of questions. My mentor in medical school at New York University was Lewis Thomas, who was a very unusual professor of medicine in that he was a poet, philosopher and writer. He wrote in the early 1980s that he thought the greatest single achievement in science in this most scientifically productive of centuries was the recognition of our ignorance. He said, in sort of a whimsical manner, "I wish there was some medical school in this country that taught a class on medical ignorance, and then someone who wrote a book on it." We decided in the mid-1980s to take him up on his suggestion, since we thought medical education was ailing in just that characteristic.

Q: Why is it important for students and teachers to use questioning skills?

Q: What do you consider to be the program's greatest success(es)?

A:The greatest success is that we have been able to stimulate questioning. We have made it fun, and I think we've inspired a lot of kids to do things they wouldn't be able to do. The concept of ignorance and questioning that we've developed has been very understandable. It's rather remarkable to take a high school student out of a disadvantaged environment where they've really done nothing but maybe a little cookbook science and to have them come into the professional world and act as professionals.


Q: What are you hoping to improve within the program?

A: Our potential for impact is much greater if we can reach larger, more diverse populations. If we can put this curriculum in many different settings and do this electronically, we can greatly enlarge our influence regionally, nationally and internationally.